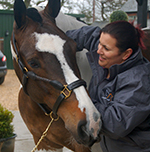 Annika is a member of the Royal college of veterinary surgeons.  After qualifying from the University of Liverpool in 2009, she spent 8 years in Equine practice before making the move to Small Animal practice and setting up her Acupuncture, Chiropractic and rehabilitation business. Annika yearned to be a Veterinary Chiropractor with The International academy of veterinary Chiropractic (IAVC) in the UK and then took her IVCA exams with Options for Animals in the UK. Annika has always ridden and competed horses, and has also competed dogs at agility and gun dog trials. She is proud to be part of a fabulous growing profession and is keen to help change people’s perceptions of Chiropractic care within the veterinary community. She has a particular interest in biomechanics and rehabilitation. 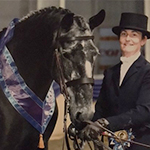 Sarah Sharp is a Registered Chiropractor with the General Chiropractic Council (GCC). After 20 years of working in the city for a top tier investment bank Sarah finally escaped and pursued her passion for helping people and their animals. Sarah graduated as a Veterinary Chiropractor from Options for Animals in the UK and is registered with IVCA, BVCA and RAMP.

Having owned and ridden horses for several years Sarah has a keen interest in looking after both the horse and rider and the interaction between them. Sarah is extremely passionate about chiropractic and is keen to further the research base and raise awareness of chiropractic for animals both large and small to help drive the profession forward. 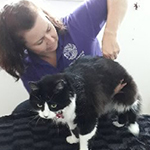 Stella Jackson is a Registered Chiropractor with the General Chiropractic Council (GCC) and graduated as a Veterinary Chiropractor from Options for Animals in the UK. Her personal areas of interest are exotics and horse and rider biomechanics.

Stella is extremely passionate about Veterinary Chiropractic and is keen to raise awareness about its benefits in both large and small animals. 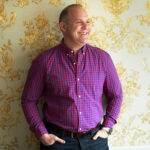 Stuart has been around dogs and animals (primarily reptiles and amphibians – keeping and breeding many different species) since he was a child, and realised after many years treating humans that small problems, when not managed, can become more serious requiring more invasive treatment. He has spent much of his life outside enjoying hobbies including shooting, fishing, and working on his allotment in Southend-on-Sea as well as a passion for increasing his knowledge in the management of many species of reptiles and amphibians.

Stuart has kept and worked dogs for several years, in particular German pointers and he passionately loves being out with his dogs Kaiser and Star.  It was an issue with one of his dogs that made him decide to study animal chiropractic and as such he trained at the prestigious Options for Animals in the UK. Since then Stuart has worked with many animals, primarily dogs, and co managed the care of various cases from several of the veterinary specialists around Essex to manage post operative rehabilitation.